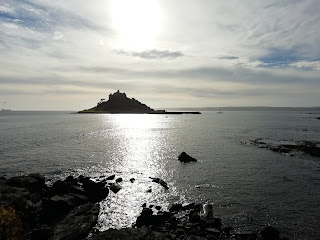 We've gotten in the habit this trip of renaming some of the Cornish places and towns- Penzance: Ken's Pants, Porthleven: Port and Lemon, St Micheal's Mount: Mont Saint Michel. I've been corrected several times today and looked at rather strangely for calling it the French name, but I'm afraid it's stuck! I've been lucky enough to visit Mont St Michel in Normandy several times in the past and I love pottering about in the lanes of the village, before ascending up to the large abbey at the top and appreciating the views. This, however, was my first time visiting the English version and it didn't disappoint. Only 20 minutes away from our holiday cottage in Mousehole, we can see the castle on the hilled Island from the window of our cottage, but the access to it is from the small town of Marazion near to Penzance. The tidal Island can be accessed by foot when the tide is out or by a stream of continuous passenger boats which on a busy half term day, we only had to wait a couple of minutes to catch. As we arrived the tide was coming in, but there was just enough time to walk across and appreciate the wide length of beach, then on the way back the boat pilot told us th 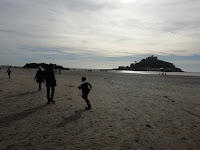 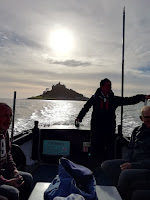 at the footpath we used a couple of hours ago, was now under 5metres of water.
In true National Trust style, there was numerous friendly volunteers and staff to greet us, sell us guide books and excite the children about the legend of the castle's giant. For half term, there were story tellers reciting the story of how a local boy named Jack had tricked the giant into falling into a large pit that he dug, he then threw the giant's tiny heart off of the Island, but missed and it landed on the path leading up to the castle. A heart shaped stone can still be found on the path, much to the excitement of visitors who spot it (but only if my children haven't covered it in leaves). 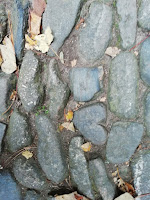 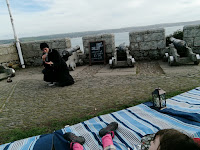 As per expectations, there was a children's trail guide to keep them engaged and spot things along the route through the castle, learning without even noticing! 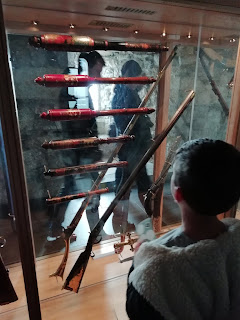 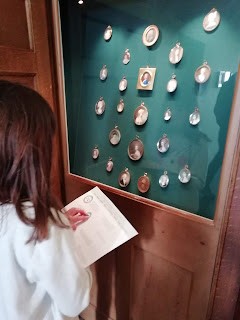 I also usually set the children a challenge of give them some questions to answer by the end of the visit.
The views from the top of the castle, both looking out to sea and looking back towards land, are stunning and it's easy to get caught up imagining the stories and history of times gone by. The castle has been used as a spiritual centre, military stronghold, thriving port and a family home in the past, so there is something to capture the interest of everyone. My children were fascinated by the lives of the current residents and wished to see where they live, sleep and eat now and the logistics of living on an Island cut off regularly by the tide. All in all we had an exciting and inspiring day involving beaches, boats, castles, armies, giants, sea views, gardens and treasure hunts. What more could you want? 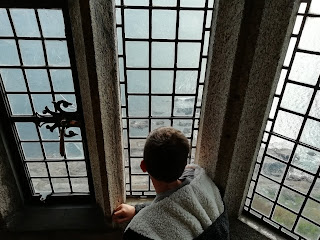 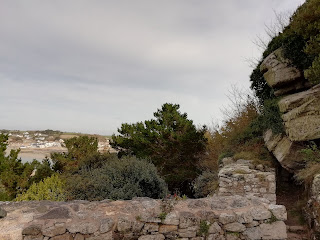 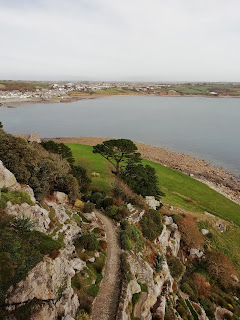 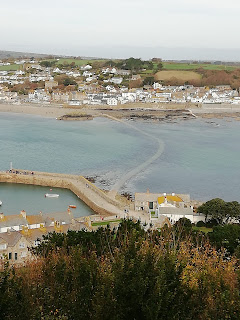